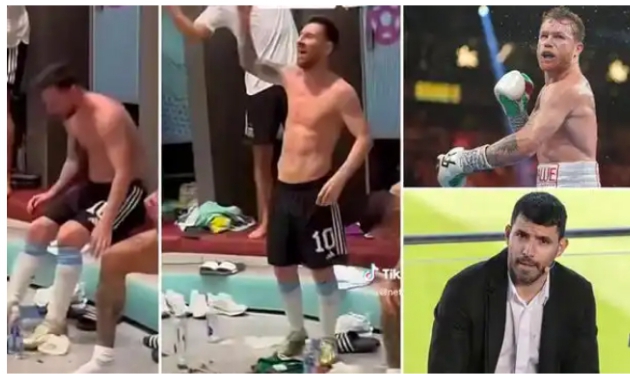 Sergio Aguero has fired back at Canelo Alvarez after the Mexican boxer threatened Lionel Messi.

Earlier the Mexican boxer accused the Argentinian of disrespecting Mexico before threatening him, saying that he should ‘pray to God’ he doesn’t find him.

Did you guys see Messi cleaning the floor with our jersey and flag,’ Alvarez tweeted. ‘He better pray to God that I don’t find him. Just like I respect Argentina, he has to respect Mexico!

I’m not talking about the country as a whole, just about the bulls**t that Messi did.’

Messi appeared to kick a Mexico shirt in the dressing room after a traditional post-match swap while taking his boot off.

Defending his former team-mate, Aguero wrote in response to Alvarez: ‘Mr. Canelo, don’t look for excuses or problems, surely you don’t know about soccer and what happens in a locker room.

‘The shirts are always on the floor after the games are over due to sweat and then if you see well, he makes the movement to remove the booty and accidentally hits it.’

ANC, EFF and ActionSA to battle it out for control of...