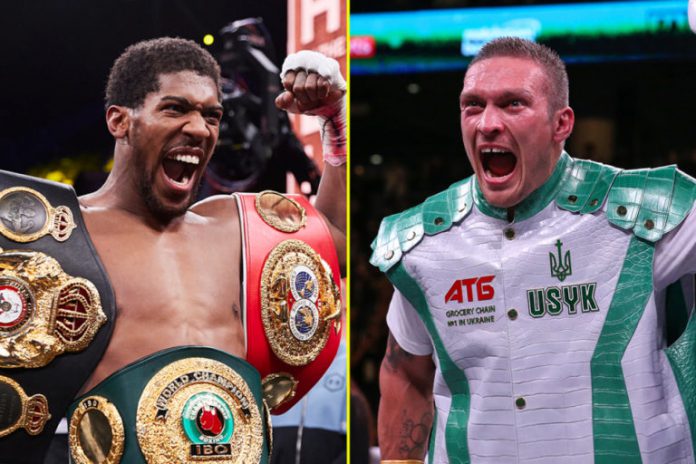 In what looks set to be one of the biggest heavyweight showdowns of the year across combat sport, Fury and Whyte will collide at the home of English football on April 23.
‘The Gypsy King’ will put his WBC and The Ring heavyweight titles on the line alongside his unbeaten 31-0-1 professional record.

Whyte, meanwhile, looks to finally ascend to the top of the division following setbacks against Anthony Joshua and Alexander Povetkin earlier in his career.

Speaking of Joshua, the 32-year-old knows a thing or two about selling out stadiums – which is something Fury confirmed they were able to do within just hours of tickets going on sale.

When asked about seeing his rival headline a venue of that size for the first time by iFL TV, AJ was quick to laugh off the importance of such a move.

He insisted: “I don’t care! I didn’t lose a blink of sleep over someone else headlining Wembley. I’m proud of them.

“It’s nice bruv [sic], do you know what I’m saying? Especially Tyson’s dad [John], he’s buzzing. He gets to see his son fight. That’s who I’m happy for. Good luck to both of them, we’ll be ringside.

“Listen, I want some discounts on those tickets because I’ve seen them on StubHub!”
John Fury has been unable to be in the arena with Tyson for his fights in America as his criminal record prevents him from entering the country.

The insane superstardom of Anthony Joshua
In less than a decade, Joshua has already headlined a stadium show in the UK on five separate occasions.

He had four big appearances at Wembley and the Principality Stadium between 2017 and 2018, before returning to London at Tottenham Hotspur’s new ground last September.

On that night he lost the WBA (Super), IBF, WBO, and IBO heavyweight titles to Oleksandr Usyk in an enthralling main event contest.

Now, with Usyk being back home in Ukraine as a result of his homeland being invaded by Russia, Joshua has to consider what comes next.

Cleric arraigned in court for allegedly posting own obituary to evade...

Champions League: We’ve To Be Clever To Beat Atletico Madrid –...