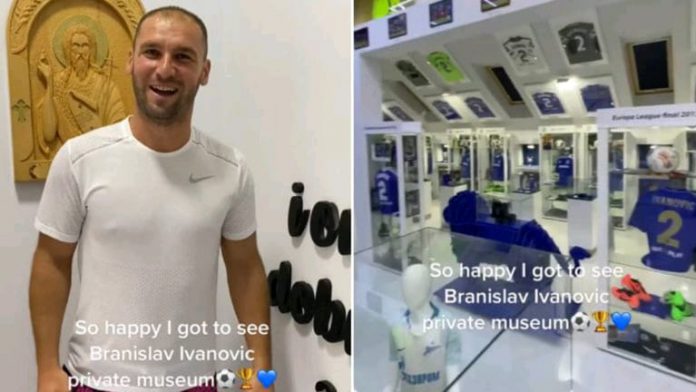 Chelsea legend Branislav Ivanovic has shown off his private trophy museum in a viral video that has circulated online.

He enjoyed a hugely successful time with the west London side, winning 10 trophies with them and becoming one of the most-decorated players to ever have played at Stamford Bridge.

Ivanovic won three FA Cups, three Premier League titles, the League Cup, the Community Shield, the Europa League, and the Champions League, with the Serb infamously suspended for the final after being told by Geoff Shreeves live on Sky Sports following their win over Barcelona in the semi-finals.

In a video which has been shared on TikTok, Ivanovic is seen showing off his honours from a highly-decorated career that also saw him win trophies during his time in Russia with Lokomotiv Moscow and Zenit Saint Petersburg.

Within the museum, hundreds off shirts from the clubs he represented and several opponents are split around the room.

There is also bizarrely a blue Chelsea bicycle within the museum.

After leaving the Blues in 2017, Ivanvoic moved to Zenit Saint Petersburg, before ending his career back in England with West Brom during the 2020-21 season.

Construction of Teshie roads to begin in 2023 second quarter –...

Pique and Robert Lewandoski sent off in Barcelona comeback victory at...