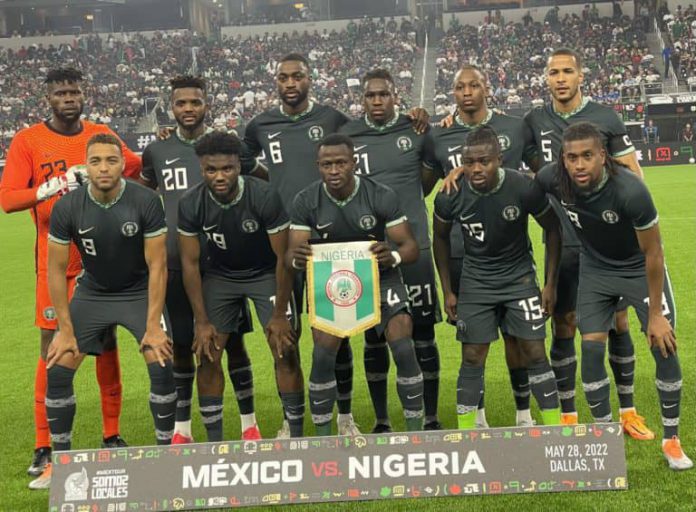 In what was the first match of Coach José Peseiro as Head Coach of the Super Eagles, a largely under-strength squad fought courageously and commendably against CONCACAF ‘s perennial champions Mexico in an entertaining game that ended 2-1 at the iconic AT&T Stadium in Dallas on Saturday night.

Missing so many first-team players including Captain Ahmed Musa and being the first time they were coming together for any session since the disappointment of 2022 FIFA World Cup ticket miss, the three –time African champions were projected to be sitting ducks for the Mexicans to roast in the State of Texas – a jurisdiction that shares a border with Mexico and where Mexico’s lingua franca, Spanish is taught in schools as a second language.

The El Tri, dainty, cohesive, coherent and egged on by over 52,000 roaring spectators in the largest covered arena in the world, bossed the opening minutes with their crisp passes, awesome positional play and nonchalant telepathy.

In this pulsating period, they were able to shoot ahead after 13 minutes when Santiago Gimenez found himself all alone with goalkeeper Francis Uzoho and steered home despite Uzoho’s valiant efforts to keep the ball away.

The arena, which also has the world’s largest hung-scoreboard (said to be bigger than a basketball court), rocked to its foundation after this, and the Eagles had to summon courage, sense of mission and ambition not to collapse entirely under pressure. Onslaught after onslaught led to several opportunities for the El Tri, but Uzoho and the Nigeria rearguard, with Semi Ajayi, William Ekong and Chidozie Awaziem kept the wolves off the door.

Peseiro opted for a flexible and interesting 3-5-2 formation, with Moses Simon and Calvin Bassey deployed as wing backs, and Joe Aribo, Alex Iwobi and Innocent Bonke serving in midfield. Cyriel Dessers and Terem Moffi searched for the goals.

It was to the consternation of the overwhelming Mexican support and bench, led by Coach Gerardo Martino, when Nigeria equalized in the 54th minute, after Calvin Bassey’s superb in-swinger was nodded home by Dessers, with goalkeeper Rodolfo Cota scrambling in vain.

However, the Eagles, while searching for a winner, conceded an unfortuitous own goal in the 56th minute, as Ekong swept into his own while trying to clear the ball from danger.

Home –based professionals Sani Faisal, Victor Mbaoma, Chiamaka Madu and Ishaq Kayode who came in after the first 45 minutes, also gave good account of themselves.

“I am happy with what we put up out there. It was the first time after the disappointment of the World Cup playoff and you can say this is a makeshift team, while Mexico had their full-strength squad out there. I like what I saw today and I have confidence that we have appointed the right coach that can restore the glory of the Super Eagles and make them start winning once more,” President of the NFF and FIFA Council Member, Amaju Pinnick, said after the game.

Nigeria had eight shots on goal compared to Mexico’s 12, while Uzoho made four saves as against Cota’s one.

The Eagles are scheduled to fly to New Jersey on Sunday morning, ahead of Thursday’s clash with Ecuador at the Red Bull Arena in Harrison.