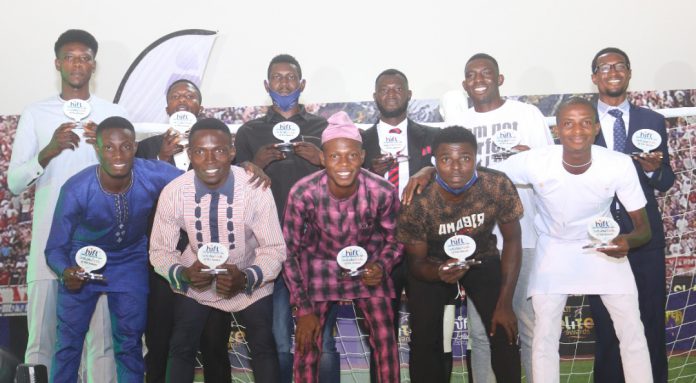 The Elite Eleven Players for the 2021 Higher Institutions Football League (HiFL) have emerged. At HiFL Elite Awards held in Lagos, the league organisers unveiled the players with two-time former African Footballer of the Year, Kanu Nwankwo in attendance.

The mid-field has Abdul-Khalil Nurudeen of the Luminaries and Usman Abubakar Sani of Desert Warriors in a 3-4-3 formation. HiFL Elite Coach of the Year Coach Dauda ‘Ziko’ Daniel, is the coach of the Elite eleven.
In other categories, the University of Ilorin won the HiFL Elite Host of the Year, Lagos State University got the Dr Nick Igbokwe Fair Play Trophy while Mr Remi Ogunpitan won the HiFL Platinum Award for his contributions as the pioneer chairman of HiFL.

In his address, the Chairman of the HiFL Board, Dr Onyekachi Onubogu thanked the sponsors and partners which include the Nigerian University Games Association (NUGA), Nivea Men, StanbicIBTC, Bold and Minimie and the participating schools for their commitment and sportsmanship throughout the 2021 season. He stated that with the right partnerships, Nigerian youths stand a better chance of engaging in more fruitful endeavours beyond crime.
President of NUGA, Prof. Stephen Hamafyleto in his remark maintained that the Association in collaboration with the HiFL management has succeeded in staving off underhanded practices in the collegiate game. With the HiFL model, the association has recorded significant success in this regard.

In his remark, former Super Eagles captain Kanu Nwankwo stated that HiFL would provide greater opportunity for young Nigerians to excel at the international level. “The organisers of the HiFL have created a platform for football talents in higher institutions to display their talents and be discovered by scouts and clubs. Nigeria needs more grassroots football programmes to encourage youths to hone their skills. I commend the organisers for their consistency in putting up the third edition of the HiFL because it will help the country to discover new talents from the participating school” Nwankwo said.

The UNIMAID Desert Warriors are the current champions of HiFL. The team defeated the AAUA Luminaries 1-0 in the final game which was decided at the Sports Pavillion of the Yaba College of Technology, Lagos.

Sergio Busquets yet to decide on his future’ – Jordi Cruyff

Phillips: Sterling’s burglary made all England players fear for their families

Araujo: It was obvious Barca didn’t want me to hurry back and Uruguay did

Morocco and Mali battle to scoreless draw on Day 4