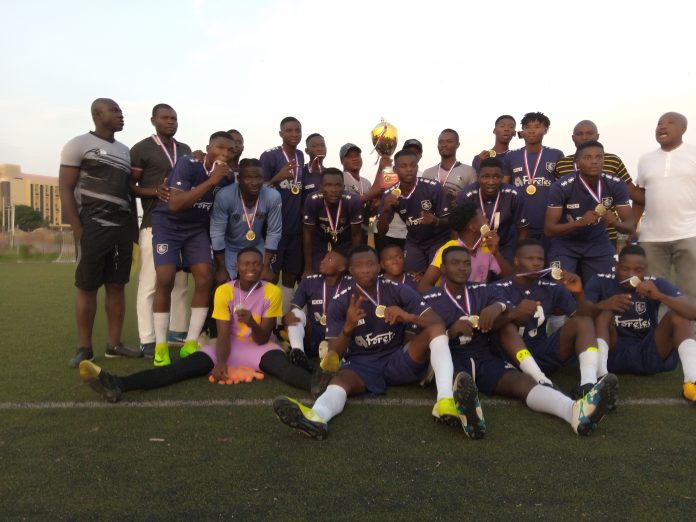 In a well-contested final at the Area 3 Sports Complex, Ikpe Andrew in the 25 minutes broke the deadlock to put smiles on the faces of his team-mates and officials before FC Digital Foot attacker, Isaac leveled the scoreline 13 minutes later. The first half ended 1-1 and efforts from both sides to find the winning goal proved abortive. The center referee blew the final whistle at the end of the regulation time and pointed to the penalty spot signalling to both sides to prepare for the shootouts.

It was dramatic during the shoot outs as both teams needed more training to perfect their penalty scoring prowess. The champions, Digital Foot FC managed to score two out of five while the second placed team, Abees Academy scored one to leave the final scoreline 3-2.

The victorious boys ran into the pitch holding themselves in jubilation as they managed to get through their toughest game in the competition.

Mustapha Mubdir, the organiser of the competition was happy to see the championship a successful one and promised to continue sponsoring such to produce a platform for young talented players to showcase their talents and be scouted by agents.

He said, “I am very happy to see that the competition is a successful one. It was a deserved final and both teams proved that their roads to the final was not a fluke and until the final take, it would have gone either way.

He added, “The competition was organised as a platform for scouts to see array of hidden talents in Abuja, pick them and brighten their careers. As a football lover, I will continue to sponsor such Championship

‘I would be devastated’ – Gini Wijnaldum hints he does not...

Dortmund Chief Claims Haaland Became A “Burden” At The Club