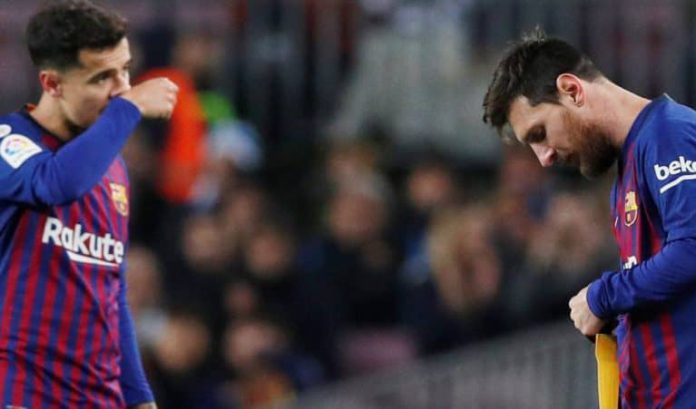 PHILIPPE COUTINHO still wears the lucky bracelet Lionel Messi gave him three years ago at Barcelona. Messi was first given the bracelet by journalist Rama Pantarotto after missing a penalty in Argentina’s 1-1 draw with Iceland in June 2018.

The footballing legend then kept it, wearing it around his ankle, which stunned Pantarotto when they met again after Argentina beat Nigeria that same month.

The lucky charm had belonged to Pantarotto’s mum but Messi was about to gift it to Coutinho, who at the time was struggling for form at Barca in 2019.
And it appears even now, the Brazilian forward treasures the bracelet as he wrote it at the unveiling of his loan move to Villa.
He will link up with former Liverpool team-mate Steven Gerrard, the current Villa manager.

Gerrard, 41, said: “He is a fantastic talent, we are lucky to have him and at the right time he will be unleashed. “His name alone inspires people, what he has done in the game inspires people. I have no doubt at all we will see the real Philippe Coutinho in time.

“I don’t buy into this ‘he never had the best time at Barcelona’. This is a kid who has won leagues at Barcelona and won the Champions League at Bayern. “He is hungry to play. If we can get him feeling good and the confidence back, Phil Coutinho is still inside Phil Coutinho.”

Coutinho, 29, is also joined by ex-Barca left-back Lucas Digne, 28, in arriving this month.
Gerrard confirmed the pair are both available to play against Manchester United at home on Saturday.

He said: “They’re available. Philippe’s trained for three days now with no issues.
“We obviously have to build his match sharpness and match fitness up. Lucas is slightly different. “He’s been involved in group training for quite some time and he’s been available for Everton before he arrived.

“They’re both available for selection with the group and they’re both in a good place but, obviously, decisions will come off the back of information we’ve had of both players over the last couple of days.”

We must ruthlessly dismantle terror networks in the horn of Africa...