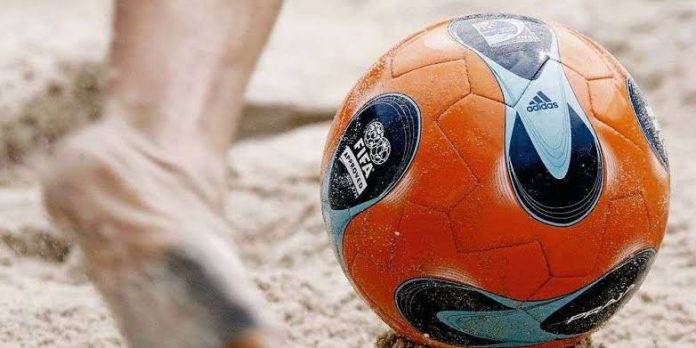 The African beach soccer Union president in an interview with journalist said Nigeria is not participating in the World Cup taking place in Russia for now but we are doing something which is really important to build a solid foundation for a beach soccer in Nigeria.

” I don’t think we are doing bad in Nigeria at the moment, at the moment, it is left for the federation. the team is under the purview of Nigerian football federation. what we are only doing on our own part is to lay down the foundation which we have already started by organising the league. the first edition was just concluded in kaduna in July like I said we are not doing bad.

From the league we have seen a lot of talent which has come out from it and also some sand Eagles players were part of the league, like I said this is a gradual process for us here in Nigeria”.

However, Hadejia disclosed that the Nigerian football federation are committed to the development of Beach Soccer in Nigeria.

“As you have seen they have thrown in their full support, the president Amaju Pinnic kick off the league in Lagos which as shown serious commitment on his part, I think they have supported us and we are discussing regarding the national team”.

Its not something we we need to rush, we need to take it gradually, If you don’t build the foundation well, the building will collapse”.

When ask about the turn out of fans at the just concluded league, he said “it was amazing. From Lagos to Kebbi to Kwara and Kaduna. The turn out was massive for us. Beach soccer is a very entertaining and industriou sports because its a combination of beach football with entertainment part of it.

We had a good turn out in Kaduna I must say we saw families, couples, young and old people came to watch the game in Kaduna.

Most important thing are the player’s you know before now, we have not been having competitive Beach soccer competition in this country. Its only when we have tournament that we get teams but now, we have started the league what we also try to encourage is to have the state league and not just the national league alone, I think that is very important for the development of Beach soccer in Nigeria.

In places like Kebbi and Lagos, they have been doing that, Kebbi is also planning for the second edition of the local league in the next few month to come and encourage states including the FCT here to be doing something at the grassroot level and there is a lot of potentials for the Beach soccer I must say”.

While also speaking, Hadejia said on the take away from Lagos, Kebbi Beach soccer tournament ” For me it gives me a great joy to have the league. It’s been long over due, and like I said, the capacity that we have build over the time we started because all the centers we went, we hard seminar and clinic for both the referee, the officials and the players and we have seen tremendous progress.

There was a lot of engagement in terms of players playing regularly Beach soccer and that is what we need in Nigeria and across the country.

We are following what is happening at the world cup and at the moment, Africa is really doing well. With the participation of Senegal at the tournament beating world champion Portugal and also Mozambique who gave good account of themself, this shows us that beach soccer is really on the rise in Nigeria and in Africa generally

Ahead AFCON 2021: Klopp Refuses to Sign Replacements For Salah, Mane