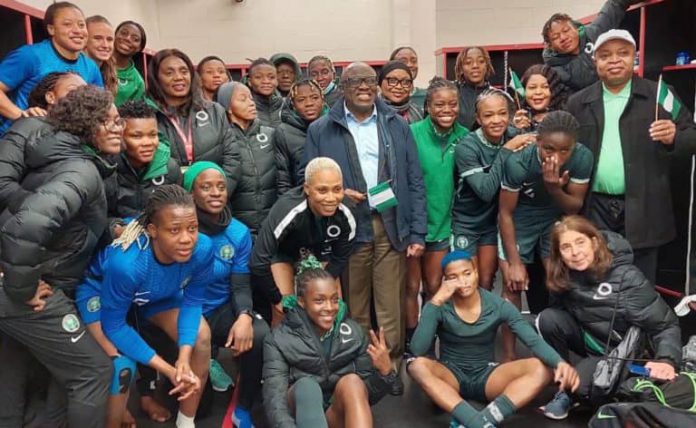 As Oshoala Returns To Spain, it is another day in the hunt for points and Nigeria’s Super Falcons say they are ready to rekindle their campaign for FIFA World Cup ticket and the tournament trophy when they clash with their counterparts from Botswana on Thursday.

The Cup holders suffered a 1-2 defeat to South Africa’s Banyana Banyana in the opening match of Group C on Monday and know their work is cut out against table-toppers Botswana, who turned back Burundi 4-2 on Monday night.

“We feel bad to have lost the opening match, and against South Africa for that matter, but we have been able to put that behind us. We resolved immediately after the match that we will give what it takes to win all remaining games.

“There is no need for too many words. All we want to do is get the win against Botswana to restore our confidence, and then we can take things from there,” Captain Onome Ebi said on Wednesday.

First choice goalkeeper Chiamaka Nnadozie returns against the Botswanans after missing the first match due to suspension, and the forced departure of Asisat Oshoala means the vibrant Gift Monday or Mexico-based Uchenna Kanu will start in the fore for the nine-time champions.

Midfield ace Rasheedat Ajibade, who scored the goal against the South Africans, is expected to again be the pivot as the Falcons search for early goals as from 9pm at the Prince Moulay Al-Hassan Stadium.

Coach Randy Waldrum could ring changes in some departments, with Glory Ogbonna likely to take her place at left back to allow the energetic Ashleigh Plumptre return to her accustomed role at centre-back alongside Captain Ebi, while Osinachi Ohale moves to right back.

Victory on Thursday will calm Nigerian nerves and allow the Falcons to look forward to Sunday’s encounter against Burundi with much confidence.

The team’s medical crew declared on Wednesday that Oshoala sustained a Grade 2 Medial Ligament strain in the 6th minute of the encounter with the Banyana on Monday, and would be out of action for between two and three weeks, with another one or two weeks period for recovery.

She is due to fly out of Morocco on Thursday after medics at her club, FC Barcelona Feminine, advised that she return to Spain.