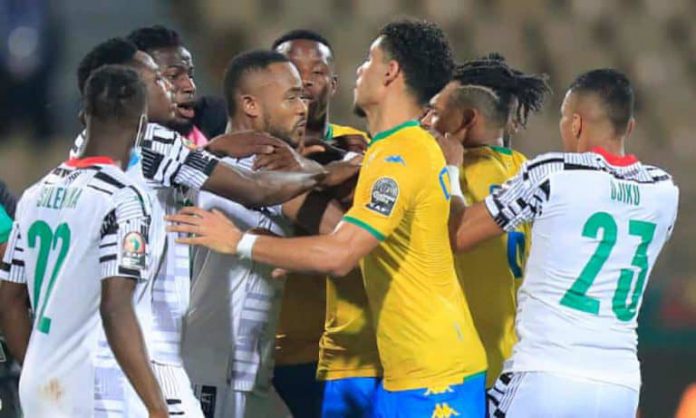 Ghana forward Benjamin Tetteh may not feature again at the Africa Cup of Nations after being handed a three-match ban.

The 24-year-old was sent off for his part in an on-pitch melee after full-time following the Black Stars’ 1-1 draw against Gabon on Friday.

The disciplinary board of the Confederation of African Football (Caf), the tournament organisers, added an extra game to the standard two-match ban for a straight red card.

Tetteh, who was an injury-time substitute against the Panthers, will miss Ghana’s final Group C match against Comoros on Tuesday (19:00 GMT).

He will not be able to feature again in Cameroon until the semi-finals – should the West Africans progress that far at the tournament.

Ghana and Gabon have both been issued a “stern warning” by Caf for their “unsportsmanlike behaviour” following the final whistle. Gabon have also been fined $20,000 for changing their team hotel without Caf’s permission.

Meanwhile, the red card shown to Mali forward El Bilal Toure against Tunisia has been upheld and he will serve a two-match ban.

Toure was sent off for a challenge on Tunisia’s Dylan Bronn, a decision which referee Janny Sikazwe confirmed following a video assistant review.

However, Sikazwe’s decision-making in the Group F game, which Mali won 1-0, was widely questioned after he ended Wednesday’s match 13 seconds early.

As a result, Toure will not be available for the Eagles’ final two group outings against The Gambia on Sunday and Mauritania on Thursday.

PODCAST: The solution to load shedding lies at the 2024 ballot...

Pressure on ride-hailing app drivers contributing to their poor hygiene –...

Advocates urge CJ Koome to entrench IT use in magistracies