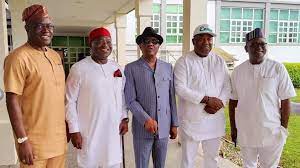 The Peoples Democratic Party, PDP, Abia State, has  said that Gov. Nyesom Wike of Rivers State and members of the G-5 Governors will grace the official flag-off of the party’s campaign on Thursday.

PDP Vice Chairman, Abia North, and the Acting Publicity Secretary of PDP, Elder Abraham Amah who disclosed this at a press briefing, yesterday in Umuahia, said that the presence of the G-5 Governors at the event would be in honour and solidarity with Gov Okezie Ikpeazu who is one of them.

Amah, who was flanked by former Secretary to State Government, SSG, Elder Ralph Egbu; and the Secretary of the PDP Campaign Council, Chief Stanley Ojigbo, said Abia remained the  stronghold of PDP in the South East.

“The Integrity G5 PDP governors namely; Nyesom Wike of Rivers State; Dr. Samuel Ortom of Benue State; Chief Ifeanyi Ugwuanyi of Enugu State; Mr. Seyi Makinde of Oyo State; and the host governor Dr. Okezie Victor Ikpeazu would grace the occasion in person as a mark of respect and solidarity with their brother governor”, he said.

Channels Television, The Firoz Lalji Institute For Africa At The London School Of Economics and Political Science Launch Historic Podcast

Pay our Tier-2 pension by February or face our wrath –...