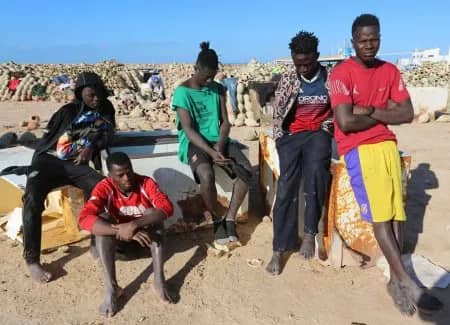 A United Nations migration officer revealed on Tuesday that over 160 migrants drowned in two different shipwrecks off the Libyan coast this past week as more people try crossing to Europe.

International Organization for Migration (IOM) spokeswoman, Safa Msehli said the new deaths have brought the death toll this year for the central Mediterranean route to about 1,500 migrants drowned.

Msehli stated that on Friday, a wooden boat capsized off Libya with at least 102 reported dead. At least eight people were rescued and returned to the shore.

On Saturday, the Libyan coast guard discovered and retrieved at least 62 bodies of migrants from a second shipwreck that had occurred.

Also on Saturday, a wooden boat holding at least 210 migrants aboard was intercepted by the coast guard.

Recent months have seen a surge in crossings and attempted crossings from Libya as authorities accelerated their deadly crackdown on migrants in the capital of Tripoli.

Around 31,500 migrants have been intercepted and returned to Libya in 2021, compared to nearly 11,900 migrants in the previous year, according to the IOM. Around 980 migrants were dead or presumed dead in 2020, the U.N. agency noted.

Ronaldo’s sister blasts Portugal coach for starting the 37-year-old on the...