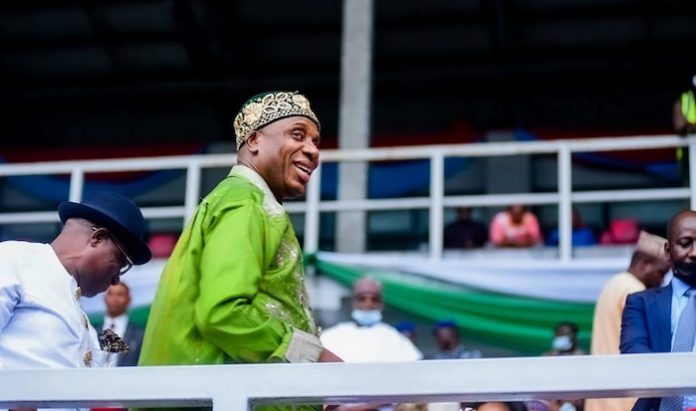 Nigeria’s Minister of Transportation, Rotimi Amaechi, has declared his political ambition to join in the 2023 presidential race.

Amaechi, who made the declaration in what was initially tagged a “thanksgiving service” at the sprawling Adokie Amesiemieka Sports Stadium at Igwuruta area of Rivers State, vowed to fight insecurity and promote the stability and unity of the country if elected president in 2023.

In his speech titled: ‘Forward with Courage,’ delivered at the special thanksgiving organised by the APC in Rivers State, the presidential aspirant said he arrived at the decision to contest for the highest level of leadership in the country after intensive consultations.

Amaechi stated that he has served the country for about 23 years in different capacities, ranging from being a Speaker of the Rivers State House of Assembly, Governor of the state and presently, Minister of Transportation.

He claimed that he is enriched with the governance system and understands the meaning of good leadership, adding that he would contribute to the development of the nation.

His statement read in part:

“I stand before you today to declare my intention and submit my application to serve as your next president. My aspiration is not about fulfilling any personal ambition. I am contesting for the office because I believe that it is my moral duty to give what I can in the service of my country.
“To sustain and intensify present efforts at solving our national problems, our democracy must ensure the emergence of a leadership that is equipped with broad experience in governance to ensure stability and continuity. To sustain our democracy and preserve our unity, we need a steady hand and a passion for success in a nation that remains united to pursue prosperity for all Nigerians.

“The current administration under the able leadership of President Muhammadu Buhari has planted many such trees in Nigeria’s future. We have invested billions in infrastructure, human capital development and made reforms that will pay off over time in terms of socio-economic growth and stability. We have invested heavily in projects and initiatives that will secure a brighter, better future for Nigeria.

“I pledge my heart, mind and soul to the task of building a Nigeria in which every child can go to school, every young person can find work or support to start a business, every citizen can travel safely around the country and sleep at night knowing that law and order prevails and every Nigerian feels included, heard, and respected.”

20-year-old housewife arrested for allegedly killing her co-wife with pestle in...

Fuel Scarcity will be Over in Nigeria Soon, NMDPRA Asserts