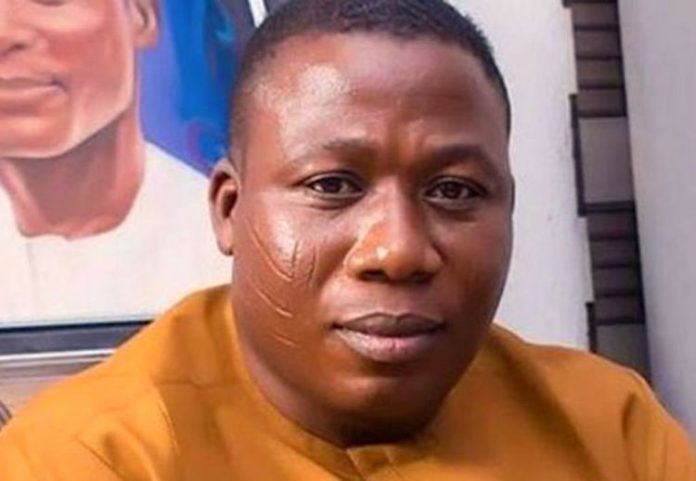 The Indigenous People of Biafra (IPOB) while declaring that they are solidly behind the Yoruba activist, Sunday Igboho, they also condemned the raid on his house by the Department of State Services (DSS).

Recall that in Thursday, July 1, the DSS paraded ‘foot soldiers’ of Igboho and displayed several arms recovered from his residence after invading him. The DSS has since declared Igboho wanted.

A statement by IPOB spokesperson, Emma Powerful on Friday, July 2 in Owerri reads:

“Sunday Igboho has not killed anybody. Nigeria government and her security operatives invaded his home and kidnapped his innocent women in the house for the proposed rally in Lagos.

“IPOB worldwide is solidly behind Sunday Igboho and Odua nation movement. The attack on Igboho is akin to the attack they unleashed on the leader of the Indigenous People of Biafra Mazi Nnamdi on September 14, 2017 when the military Python danced in his country home.

“It’s very appalling that the Nigeria security agencies are aiding and abating Fulani terrorists herdsmen and Boko Haram, ISWAP and other Fulani terror groups to kill innocent citizens in Nigeria, while suppressing those genuinely defending their people.

“Nigeria will soon regret their actions towards the Southern Nigeria and Middle Belt region. The whole southerners in the army, police, DSS and the security outfit in Nigeria must understand that this fight was brought to their homes by Fulani Jihadist.

“Nobody should think that things are still normal. Very soon all Christians will be forced to convert to Islam. It’s part of their agenda.”

“But IPOB is working tirelessly to stop this evil agenda. And we must do it for the betterment of unborn children in this land. Now is the time for the entire Southern Nigeria and middle Belt to unite and defend their ancestral land otherwise we become slaves to the jihadists. But God forbid.” Powerful said.

Raila back to factory settings with fresh poll rigging claim