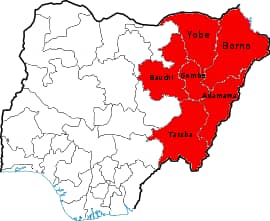 Hundreds of people who had only recently returned home from refugee camps, after local government officials claimed their town was safe, have been taken hostage by Jihadists in the restive north-east of Nigeria.

The jihadists came and raged into Kukawa town, in Borno state, on Tuesday night, with more than twenty trucks. They captured hundreds of fleeing residents and attacked a nearby military base protecting the town.

1,200 residents had only recently returned to Kukawa in early August, from refugee camps 180km (120 miles) south in the state capital, Maiduguri, a local chief who escaped the attack, told AFP.

The victims had returned, hopeful of restarting their lives and cultivating their farmlands, “only to end up in the hands of the insurgents”, he said.

Flood victims have lost trust in the government with aid moving...

Allow Samuel Torbi time to recover, bring your next witness –...