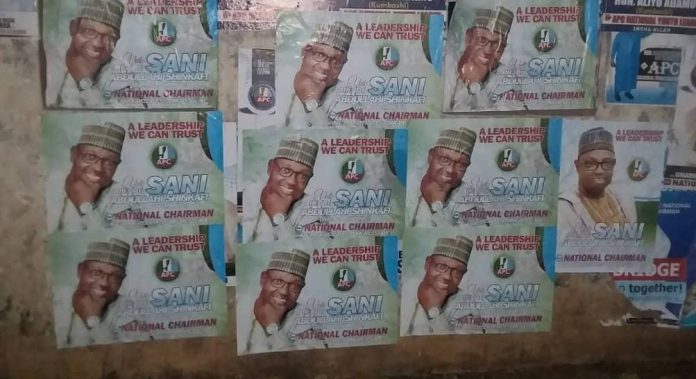 Ahead of the National Convention of the ruling All Progressives Congress(APC) slated for February, posters of the leading National Chairmanship aspirant Alhaji Dr Sani Abdullahi Shinkafi has flooded the Federal Capital Territory(FCT).

The posters which carried Shinkafi bold pictures and names surfaced on Sunday and were strategically posted on public infrastructures like traffic kiosks, bus stops in Garki, Central Area, Maitama, Wuse 11, Gwarinpa, Airport Road around APC national secretariat and Shehu Shagari way opposite Ministry of Justice in the FCT.

It would be recalled that Shinkafi (Wamban Shinkafi) had on October 26th,2021 declared his intention to run for the APC National Chairmanship.

He had in his notification to the APC Acting Caretaker National Chairman and Governor of Yobe State Mai Malam Buni stated that “after wide consultations and discussions with my family, friends and political associates I have decided to heed the call to contest for the office of the National Chairman of our great party the All Progressives Congress (APC).

Shinkafi had pledged that: “I would want to continue with the great job done by the Acting National Chairman His Excellency Mai Malam Buni in re-organizing and making the party the greatest party in Nigeria.

“In its bid to retain power in the forthcoming general elections in Nigeria in 2023, there is an urgent need for the party to look beyond personal interest to set its house in order by first of all ensuring that only a credible hand is ushered in to lead the party as the next National Chairman.

He pointed out that “the party came with sound policies and programmes that would have salvaged the country but the party’s dream was short-lived because the forces that are not progressives joined the party through the backdoors only to win elections.

“The internal functions and wranglings within the ruling party made it to lose elections in Bauchi, Adamawa, Rivers, Imo, Oyo, Edo and Zamfara states among others apart from many legislative seats both at the states and National Assembly that were dashed away as a result of poor handling of the party’s 2018 primaries.

He noted that “the party currently needs a leader who commands respect among his contemporaries, a man whose mind is bounded by reconciliatory traits and elder statesman who have paid a price for APC to survive against his personal interest.”