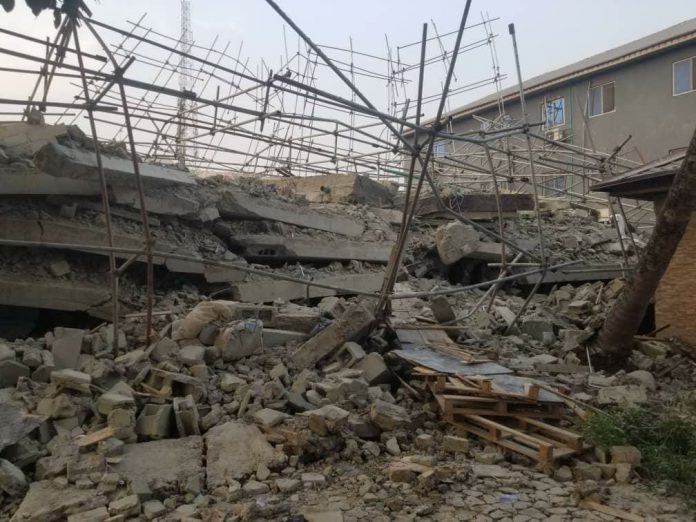 Two people have been reportedly rescued and five bodies recovered from a collapsed three-storey under construction on Harvey Road, Yaba, Lagos State.

It was gathered that the building collapsed around 4pm on Saturday, trapping most of the workers under the rubble. One of the survivors, a teenager, was said to have gone out from the building to buy food few minutes before the structure collapsed.

It was learnt that the building had shown signs of distress days before the incident but that it was ignored by the builders.

The South West spokesman of NEMA, Mr Ibrahim Farinloye, who confirmed the incident, said hours after the incident two victims were rescued.

Mr Farinloye said, “Four bodies have been recovered. Of the two survivors, only one was actually trapped while the other, a teenager, escaped after he complained of hunger and was given money to go and buy food. Minutes after leaving the building, the structure collapsed.”

He further added, “Search and rescue continues as a family has reported that one Damola is still missing and that he was expected to be at the site at the time of the collapse.”

Meanwhile the fifth body was recovered at about 4:22pm on Sunday. He was identified as Damilola, an industrial training student.

DSS Denies Reports of Joint Operations with American Soldiers as US...