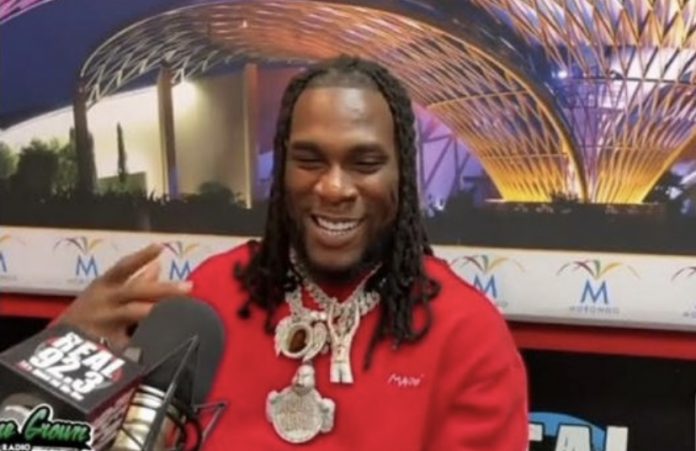 Uzoh, the CEO of Gold Moola Entertainment, called out Burna Boy and his mum on Instagram claiming the singer’s mum tried extorting him.

On Tuesday, November 2, 2021, Uzoh took to his company’s official Instagram account [@goldmoola] to make allegations on how the singer refused to perform at a scheduled show after being paid in full as well as how his mum had demanded extra charges for no reason.

In his five-page story, Uzoh alleged that the singer collected $50,000 from him to perform at a show slated for October 30, 2021, in Houston, Texas, US but never showed up.

“@Burnaboygram and @thenamix. Bose Ogulu attempted to extort me $10k. After the agreed sum was paid in full, she proceeded to ask for an additional $10k.

“The deposit was paid on October 7th in Los Angeles, that was when he posted this canceled flyer.

“After the balance was paid in full, he posted and confirmed his attendance. That’s when Bose told me that I had to pay another $10k before he comes downstairs.”I realized that I was being extorted. At that point, I no longer wanted to move forward with the deal. This was around 1:10 am. He was set to arrive at the club at 12:45 am. Once I requested a refund of the $15,000 that was paid that night.

“When I realised what was happening, I decided to pull from the show completely. I asked for the $15k balance that was paid on the night and they refused to return the money.”After hours of negotiations in the hotel lobby, the entire team snuck out of the hotel through the back exit to avoid us.

“These are just the primary details of what happened on the 31st of October in Houston, Texas. Because I didn’t fall for the demands of extortion, I was robbed of over $50,000 and my name was left to be slandered in the city I love. We will allow the law to finish what they started. I pride myself on being a stand-up guy, especially in the entertainment industry.

“My only demand at this point is a refund. You were paid for a service that you didn’t complete. Be a stand-up guy and kindly return my money @burnaboygram.”

Burna Boy, his mum and the media team have not reacted to the allegations.